Mislav Malenica, today’s entrepreneur and AI engineer, was formerly a research novice with work experience at the Ruđer Boković Institute, whose interest in programming began in elementary school, while in high school he was already completing his final paper on neural networks. After asking himself how to create automated systems or AI technologies that would help people while drastically simplifying jobs and everyday life, he produced and contributed to the creation of various solutions inside his Mindsmiths startup.
Maggie, a digital assistant who was engaged in the real hospital system and served as an adviser between patients and doctors, is one of the most well-known. This pilot test, for example, resulted in an 80% decrease in doctoral examinations.
Prior to that, he presented his ideas in some of the most significant areas, including Silicon Valley and China, where his perspective and expertise were expanded. He also serves as the president of the CroAI association, which is focused to artificial intelligence.

In this interview, Mislav discussed artificial intelligence, its future, and the role of a mentor, which he believes is beneficial in everyone’s life.

What can we expect from your speech on AI at LEAP Summit?
Autonomous agents will rule the world. I’ll explain how we can use that fact to our advantage.

You leaped into entrepreneurship after working at the Ruđer Boković Institute. Is
there anything you’ve learned along the way that you’d like to share with other
young entrepreneurs?
Scientists very often work on synthetic challenges. That’s not as rewarding as when you
directly impact the world. Entrepreneurs are often not aware of what’s possible. That means
they are not giving their businesses the best chance to succeed. We are all parts of the same
ecosystem. We should interact more when there is no clear path to collaborate.

What are the possibilities for intuition and emotional intelligence to be transferred
to AI? Do you believe this is necessary, or should we not strive to create artificial
intelligence as “human” as possible?

When we ask a machine to predict an opponent’s move in a chess game, complete a
sentence based on just a few words, or even draw something, we ask it to use intuition when
generating an answer. This intuition is similar to our human intuition.
Emotional intelligence means someone can recognize and handle their own emotions and
the emotions of others. We should not try to replicate it in AI because it would be fake and
not helpful. Our job when creating digital beings is to make them in a way they’ll contribute to
the world. For example, some of them, if they are helping with caring for chronic patients, will
need to demonstrate a high level of emotional intelligence. But it will be a “machine” version,
and that’s fine.

My biggest lesson is that no one can succeed alone. Community is essential. In both those
places, it’s evident that everyone: entrepreneurs, scientists, journalists, politicians, and even
the general public, want to build something great that they can sell to the rest of the world.
These places do it differently, but the underlying concept is the same.

Which areas do you believe are currently lacking in terms of increased investment
and incorporation of artificial intelligence but, have good chances for improving
one’s life?

Twenty years ago, AI was for scientists, ten years ago for engineers, and today it is for
people who can design meaningful coexistences between people and intelligent machines.
As a result, I’m expecting a significant boost in healthcare, education, parenting, banking,
and insurance, where AI will play an essential role in helping people make better decisions.

If the application of AI could enable people to have more and more access to
resources and necessities, which would cause a causal reduction in the need for
work, how do you think it will affect humans? What do you believe will have the
greatest impact on a person’s life?

Dedicated agents who will help each person consistently make better decisions. Making
good decisions accumulates over a lifetime and can significantly impact how healthy we are,

how much time we’re spending with people we love, what we are experiencing, how we are
coping with the world that is changing so fast, etc.

Which professions have you noticed have become more important / sought after, or
have begun to develop more because of the rise of AI? Is it now more vital for this to
have, for example, creativity, soft skills…?

The world is changing so fast that people’s professions stopped being something that defines
them. No school can prepare you for the next forty years of your professional career.

Probably not even for the next five years. Right now, it’s more about your curiosity, open-
mindedness, flexibility, and ability to collaborate with others. People who are inspired by the

life and want to have an active role in it will be successful whether they come from
engineering or humanities.

How would you best explain and eliminate the notion that the appearance of AI is
inherently harmful and dangerous?

People use AI every day and don’t find it harmful or dangerous. On the contrary, when they
take a photo and AI waits to detect a smile or makes sure everyone’s eyes are open, they
find it exciting and helpful. People are afraid of things they don’t understand because they
don’t know how they will affect their lives. AI is just one of the things on that list.

You frequently emphasize the importance of mentors in life; what is your specific
advice on finding a mentor, and does it differ in Croatia compared to the rest of the
World?

It’s the same everywhere. Reach out. Take a risk. Think about what you can offer to the
person on the other side. Don’t take rejections personally.

Ivana Gažić: People are often not realistic about potential returns and tend to be attracted to very risky investments

The World Day for Safety and Health at Work 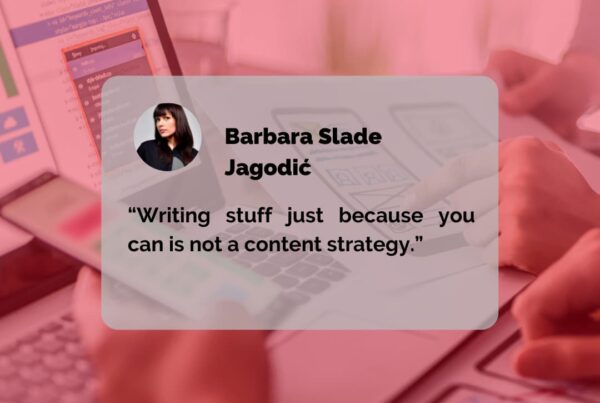 Barbara Slade Jagodić: We don’t need more products in our lives, but we need answers and solutions to our problems